Free Shipping On Orders Over £50

Sancho’s is the home of sustainable fashion and ethical lifestyle products. Our Black woman owned business is based in Exeter, UK where we believe in doing better, providing sustainable and affordable clothing options. Through activism and spreading awareness, we are working towards a kinder world. Shop our transparent pricing collection here, our Organic Cotton Bestsellers here and read more about us here

Ethical fashion, despite providing a brilliant alternative to fast fashion, is not without its problems. One of these is white saviourism. The term refers to when white people provide help or aid to non-white people in a self-serving manner. It perpetuates the colonial narrative that non-white people are in need of saving by white people.

White saviourism is prominent in many aspects of society, from film to charity. This blog will explore how it is deeply embedded in ethical fashion and what you can do to become an ally rather than a saviour. 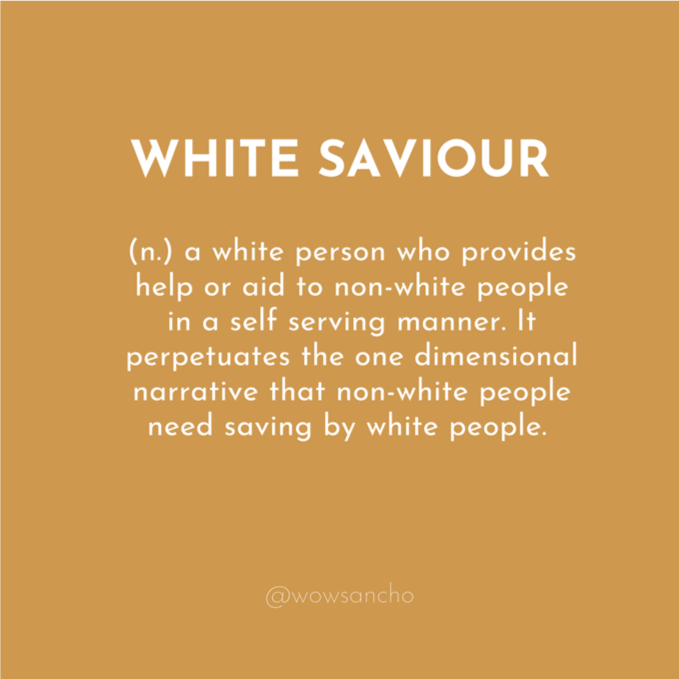 In 1817, John Milldescribed those facing colonisation as a half-civilised race in need of British help to civilise and order them. The missionary work which followed, perpetuated the power imbalances created by colonialism. They imposed western ideals and neglected dialogue with local people. It is this power imbalance which makes the white saviour complex so problematic.

Stemming directly from colonialism, many modern charity exploits and ‘do-gooders’ base their actions on an assumption that there is an inferiority of non-white people and their voice is more important than the locals’. Often, it may not even be conscious on the part of the saviour, but there is an erasure of humanity that is harmful.

In ethical fashion, whilst trying to change the culture surrounding fast fashion’s exploitation of workers and the environment, white saviourism can creep through. Many women of colour are only represented as being labourers in Africa and Asiaand are less likely to have a seat at the table. There is poor representationamong brand owners and in marketing campaigns. Therefore, despite appearing to do good, white saviours regularly fail to tackle the systems of oppression which create the problems they supposedly help.

One such example is TOMS. Created as a for-profit company, TOMs marketed themselves as saving the world. They promised that for every pair of shoes sold, one would be donated to a child in Africa. This harks back to the Band-Aid image of a starving black child as a way to raise money. Whilst this TOMS initiative appears to be helping, in fact, it enabled them to sell more shoes. In addition, giving a child a pair of flimsy shoes that fall apart after 10 wears, doesn’t address the global economic inequality that creates vicious cycles of poverty. Performative brands like TOMS are merely a band-aid that won’t heal the gaping wound of systemic poverty.

Reformation is another company that has come under fire for performative action. Over three quartersof Reformation’s management team are women or people from underrepresented populations. Despite this, in a public apology, the CEO admitted to avoiding black colleaguesdue to the colour of their skin. This made it very clear that despite marketing themselves as ‘ethical’, performative action was their main strategy. Reformation, and many other ‘ethical’ companies, use their diversity as a way to sell more without creating a culture of inclusion.

These ethical fashion companies who are guilty of white saviourism are little better than the fast fashion brands doing the same thing. For example Gap, who pledged $250,000 dollarsin support of NAACP and EmbraceRace but refused to honour contracts with their suppliers. This resulted in unpaid wages to the black and brown women who sew their products. Not to mention, their executive leadership team is primarily white. Across the fashion industry, change needs to occur.

The organisation No White Savioursstate “we never said ‘no white people’ we just know you shouldn’t be the hero of the story”. Centring white people at the forefront of tackling injustice is white saviourism and will only reinforce the unequal power dynamic that results in exploitation and uneven wealth divide. We want to make it very clear, ethical and sustainable fashion will always be a better option than fast fashion. But there is always more to be done in the fight for justice for both the planet and the people who live in it.

How to Become a Better Ally

In order to avoid white saviourism, ethical fashion needs to go beyond using a token BIPOC model and showing white people as being the catalyst for change. Instead, if you have a platform, pass the mic. Elevate the voices that are hidden in the dominant narrative. We also can’t say this enough, vote with your wallet. Buy ethically from POC owned businesses, pay POC for their work and keep on educating yourself on what more needs to be done to create a truly just world.